Has Anyone ever built a working rollercoaster model?? 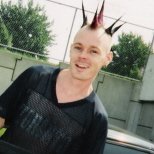