Switch to full style
Games, links, news, movies, WHATEVER!!! As long as it's not TOO dirty!
New to the TPR Forums? Come say hello and introduce yourself HERE!
Post a reply
Reply with quote
Cbjam1979

So, I wanted to ask you guys if you know anything about this Country Bear Jamboree ripoff called the Country Bear Jubilee.
I'm a big fan and collected lots of information, pictures and videos of this show. But there's always something missing. So I wanted to ask anyone who knows this show. It was made in 1979 by a company called Creative Engineering inc who also build the famous Rock-afire Explosion show for 200 Showbiz Pizza Place restaurants which are now Chuck E. Cheese's.

This is the show that once operated in Calaway Park.
calawaypark7.jpg (264.34 KiB) Viewed 6173 times

Knoebels show. This show still at Knoebels, but behind the wall in the Laser Runner building. They retrofitted them once, changed their band name to Rockin' Billy Wilbur and the Bear cats. Slapped new outfits and a new showtape on.

The Country Bear Jubilee is made out of three stages. The left stage with two bear brothers who work at a gas station called Smitty's Super Service Station. The center stage, with four bears playing instruments, called the Hard Luck Bears (which is the main focus of the show). And the right stage where the mama bear and the Gooney Bird in the barrel sing their songs.

Calaway Park in Canada
Knoebel's in Pennsylvania
Playcenter in Brazi
Carowind's in North Carolina
Blackpool Pleasure Beach in the United Kingdom (moved to Frontierland, Morecambe)
Mundo Magico in Chile (moved to fantasialandia and is the only show that still operates)

All shows except of fantasialandia's are out of order. However, the show is retrofitted and in horrible condition.

So, there's still some Information out there and I would like to know more. I still know a lot about this show but, pointing everything out would take too much time.

If you want to take a listen to the audio, I collected four showtapes of this show and I would like to share it with people that might recognize the audio.
1. The original Hard Luck Bears showtape http://picosong.com/NTni/
2. Country Bear Picinic at Knoebels Groves http://picosong.com/NTFT/
3. Hard Luck Bears Show with Mortimer and Buford http://picosong.com/NTRZ/ (Mortimer and Buford were two new animatronics that were added to the Country Bear Jubilee's predecessor called the Bear Country Jubilee (1977) as they came back destroyed from Morey's Pier)
4. Rockin' Billy Wilbur and the Bear Cats (Knoebels) https://www.dropbox.com/sh/fdfxfpxcvsts5nd/AAAin3zH5GI-OhsBofWSrPg2a/Hard%20Luck%20Bears/Hard%20Luck%20Bears%20-%20Rockin'%20Billy%20Wilbur%20and%20the%20Bear%20Cats.mp3?dl=0

Here are some pictures

Another picture of "Show de Osos" in Mundo Magico. The show is also translated into Spanish.

Here are some videos

If you have any pictures or videos of this show, please let me know. I hope you guys enjoyed it so far!
I'm excited for your story!
Reply with quote
Nrthwnd

They say that copying something, can be/is a "form" of flattery.

All of their faces scare me. 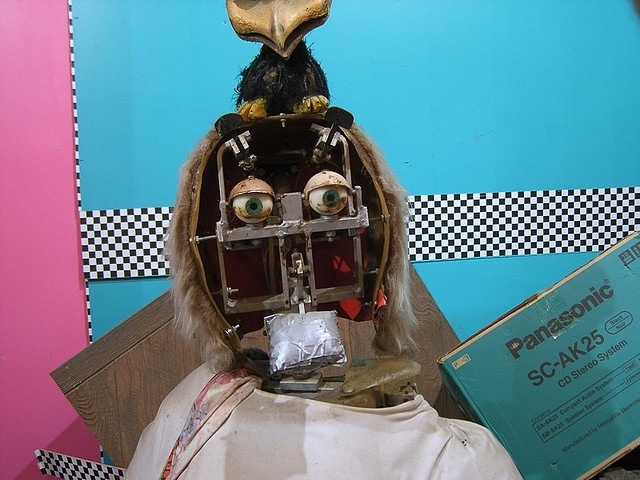 They sure can look scary if you don't take care of them. Many parks didn't. That why most of the masks need to be replaced. Or better check the air pressure, cause they run with pneumatics which can be really annoying sometimes if you don't maintain them properly.
Reply with quote
Cbjam1979

That's only the framework. I assume they put all the cosmetics into boxes to protect them from aging fast.

I can add to this craziness. That last photo shows two bears, with a female silhouette behind them...

...and where are their "inside" paws in the darkness?

The smaller right one, looks especially suspicious...and creepy all at the same time!
Reply with quote
Cbjam1979

That silhouette is just a background that used to be in the show when they retrofitted them. The can't move at all cause they need to get all the airlines hooked up on a mac valve, and then on the showcomputer, to move and sing again.
Reply with quote
Genx24

My god those things are horrifying.
Reply with quote
Cbjam1979

Even in their original state, they horrify me.
Post a reply
>>
Switch to full style