For day 7 I didn’t have any specific plans. Well, until the evening the day before when I got the following text message from Robb:

“Garbles is in town tomorrow night. I made some FP at MK if you want to go.”

And with that I suddenly had plans for this day as well. The meetup wasn’t until the evening, which I was fairly happy pleased with, because my feet were in dire need of some rest. I spent the first hours of the day in the apartment at the resort, getting a good breakfast, doing some laundry and watching some football (thats soccer for you Americans, match was between Chelsea - Liverpool if anyone feels the need to know).

Around 2 PM I ran out of patience and headed out. I decided to head to EPCOT first. Spent a couple of hours at the park, did multiple single-rider laps on Test Track and also took a lap around World Showcase before heading up to Magic Kingdom to meet up with the group for the evening.
(thanks to Robb for providing most of the pictures from Magic Kingdom this evening)

Here I am back at EPCOT for some more Flower & Garden festival.

Did several single-rider laps on Test Track. I love this ride, so much fun! And as I have stated previously, the single-rider line moves superfast due to the 3-across seating.

Another beautiful day around the World Showcase Lagoon.

Snow White was out meeting guests in Germany.

Quick food-stop in Japan. This thing had some chicken stuff inside if I remember correctly. Quite tasty!

EPCOT is so beautiful that you feel you never get enough pictures of it.

There was no way I was going to pass by these two without stopping!

And with that I would say my final goodbye to EPCOT for this trip. Love this park so much and I will definitely be back in the future!

I headed directly from EPCOT up to Magic Kingdom. Hello castle!

Met up with the group and instant silliness occured!

When you forget your space goggles you have to improvise.
(Pssst Tom, the camera is on this side)

We decided to be very brave and go on Peoplemover again. The outcome was inevitable...

“Hello Periscope viewers, we are stuck on Peoplemover again”

The whole group! I now have a 67% “getting-stuck rate” on Peoplemover. No evacuation this time though, we were going again within 10 minutes.

Went for a ride on Splash Mountain and saw a whole lot of Brer Bear Butt which left us all mentally scared for life!

Time for some more Space Mountain. Got my space goggles on now. You can never be too cool for space! (or as Robb is demonstrating, too silly)

“It sure is dark in space”.
(what the hell is going on behind me?)

“No Robb, don’t eat the strangers”.

We all love Seven Dwarfs Mine Train!

Best thing to do after park closing? Laying on the grass of course...

Jake approves of the grass!

This might have been the only normal picture taken all evening!

Look at all these people!

Not quite sure what’s going on here....

And finally we once again say goodnight to Magic Kingdom, this time with a nice view of Space Mountain from the monorail.

This was an insanely fun night at the park!!!
Reply with quote
viking86

Maybe, but it gave me some of the most memorable rides of my entire trip! The Peoplemover will forever hold a special place in my heart.

Jakizle wrote:This was an insanely fun night at the park!!!

That is a highly accurate description of that evening! So much fun....
Reply with quote
viking86

New day, new opportunities. Arrived at Sea World a little after 10 AM and met up with fellow forum member Zach (thepoint4life23) shortly after, for what would become another great day in Orlando.


Some quick notes from the day:
- Sea World has two excellent B&M's, and when Mako opens next year they will have a really strong trio of rollercoasters.
- Excellent operations, two trains running on both Manta and Kraken even with both rides being walk-on all day.
- Wild Arctic is the worst simulator I have been on! The concept and story is cool, but it's just soooooooooooooo dizzying! I refuse to ride this ever again.
- Moving to the other side of the planet, Empire of the Penguin in Antarctica is another dissappointment. It's such a cool ride system that allows for so much, but I feel this ride misses so many opportunities to be great.

Overall I really like Sea World and I sincerely hope that the addition of Mako will bring a brigter future for the park. They have some excellent rollercoasters, but I cannot help but feel that they are a bit behind when it comes to rides.

Anyway, onto the pictures...

One of the first things you see at Sea World is the “splashdown” turn on Manta. Very cool feature and it looks excellent! A true eye-catcher!

First ride we did after meeting up was Journey to Atlantis. Didn’t go on this last year so it was new for me.

I thought this ride was great fun, and had an acceptable level of wetness.

We had some time to kill before the killer whale show so we went for a spin on Wild Arctic. When you get to this area you can be happy, as it means you have finished your ride on the most dizzying simulator ever and you don’t have to go on it ever again!

Plenty of available seating for the show today.

Spectators on the other side about to be soaked.

Kraken is a great ride!

We rode in the front seat for our first ride. It wasn’t until we hit the brake run we realized why our ride was so quiet.... there wasn’t a single person on the ride behind us.

Kraken monster ready for another summer of eating park visitors.

The show was pretty fun!

Moving on to Antarctica.

We took a ride on the “wild” side of Empire of the Penguin. I can understand the critizism that this ride has received. It’s such a cool ride system with so many opportunities, but the ride itself is severely lacking and you end up feeling very dissappointed when the ride is over.

Penguins are cool animals, but they smell like shit! Literally!

Look at those fat asses!

The first drop isn’t very spectacular, but it surely gets the ride going!

This is the moment where all first-time riders go "Oh crap"!

The pretzel loop is one of my favorite coaster elements ever. Such a unique sensation...

And I’ll end this short report with a little more love for Kraken. Smooth, some good forces and overall a very fun ride.

Overall it was a good day at Sea World, they have two very good rollercoasters and I’m sure Mako will be an excellent addition to the park. I definitely feel it’s much needed, because apart from the rollercoasters and Atlantis I feel the park is lacking a little when it comes to quality rides.

It was great meeting you. The ride on Kraken was one of the oddest things ever.
Reply with quote
_koppen 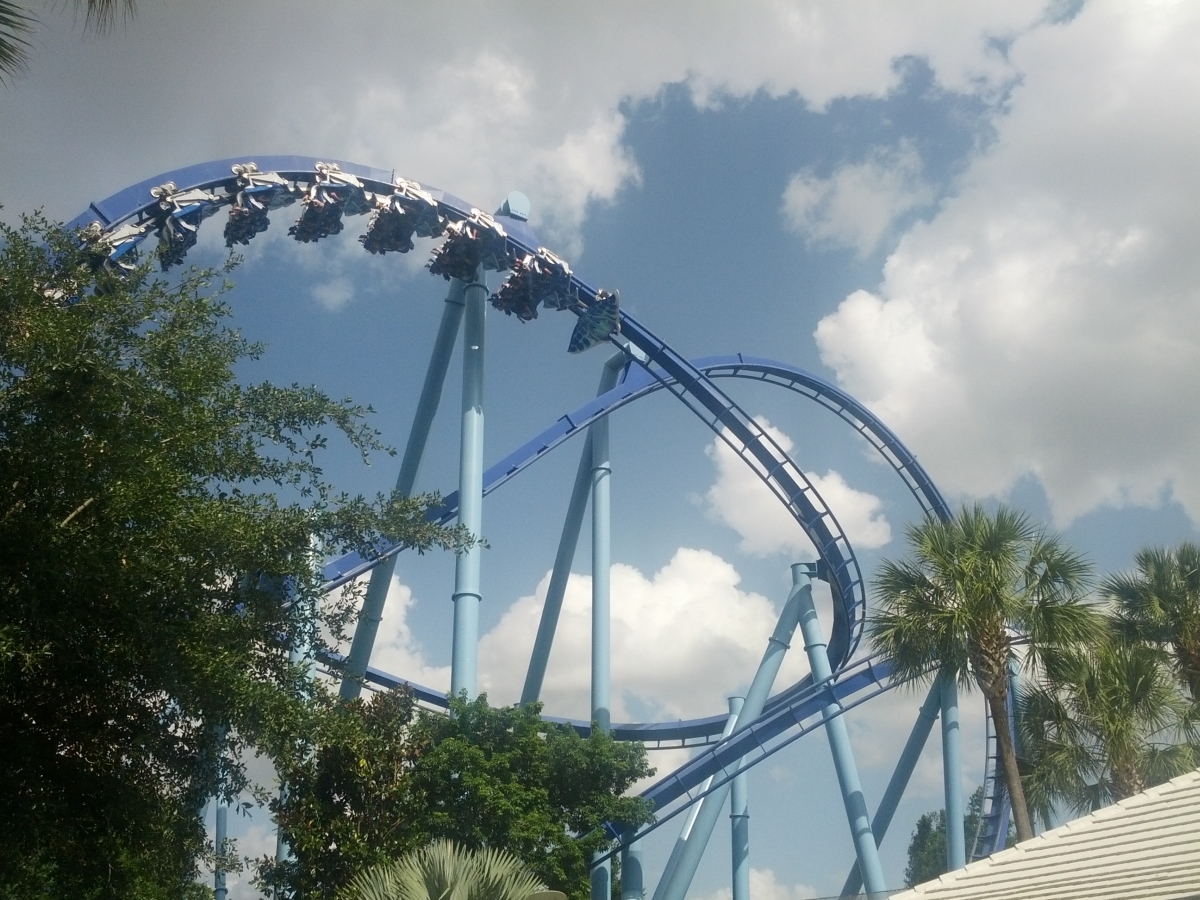 This is one of very few elements I'm absolutely dying to try out!
Reply with quote
viking86

thepoint4life23 wrote:It was great meeting you. The ride on Kraken was one of the oddest things ever.

That sure was a strange ride indeed. I have never had such a "quiet" ride on a B&M (or any other coaster for that matter). Thanks for meeting up with me, I had a great day!

_koppen wrote:This is one of very few elements I'm absolutely dying to try out!

And with good reason, it's easily one of my favorite coaster elements. Heading up into the pretzel loop really gives you a chance to think about what's going to happen, and if you ride in the backseat there is some serious pull going over the top!
Reply with quote
dreynolds1982

_koppen wrote:This is one of very few elements I'm absolutely dying to try out!

I've never been on Manta, but the pretzel loop on Superman:UF at SFGa is one of my all time favorite coaster elements. Just an incredibly unique sensation, unlike anything else I've experienced on a coaster. Hard to describe. Definitely something you need to experience for yourself!
Reply with quote
cfc

^To me, the experience was akin to having an elephant stand on my chest. Not a fan of the pretzel roll, but to each his or her own.
Post a reply
>>
<<
Switch to full style