Goodbye to Speed: The Ride at the Sahara (Vegas)?

Did TOGO in the U.S. ever have a decent reputation?

Was riding Ultra Twister any better than watching Riddler's Revenge construction? Oh wait, Ultra Twister was removed 6-7 years before you were born.

^I'm basing that primarily off of past reputation. Everyone I've talked to that's been on it says that it was relatively smooth compared to other Togo rides.


Well, here's my report...On my LAST RIDES ON SPEED: THE RIDE

We ended up heading over to the Sahara on Thursday afternoon after hitting up a small little pinball machine museum. Heading in, the hotel in general really seemed in disrepair. The parking lot ceilings had shoe-markings and graffiti all over it, the elevators and automatic doors were barely working, and alot of the NASCAR themed parts had fallen apart (IE display cars' wheels being popped by people, floor and glass walls being damaged). Still, the glorious yellow neon sign stood next to the huge NASCAR-style racer.

Seeing as I was looking for something cheap, I went with the All Day Ride pass, which was a VERY small price of $14.99. After getting the wristband, I headed up the long flight of stairs leading to the small piece of track where the speed machine of Vegas was located.

Turns out Robb was right, and we had to wait 15 minutes between rides. I soon discovered the TRUE reason why this is so. Sahara wants to get as many people on the ride as they can, so they now use the strategy of waiting so the ride may reach the highest capable capacity at that amount of time.

After about 10 minutes, we flooded into the still comfortable Premier Rides LIM cars. I was only able to reach the second row (But this would be different the next few minutes...) the first ride, and the OTSR were surprisingly tighter in the back rows than the front row. Still, it was a snug fit, and we all prepared for the next 30 seconds of pure speed. After a brief safety review, the LIMs fired us off, and carried us through a small but incredibly fun layout, complete with the same loop, headchopper past the casino, 200-foot spire, and reverse course as I experience in 2007. At the end of the ride, all that went through my mind was simple love. Obviously, there was a solution to the craving I had for another time around...Ride again.

Heading back down the stairs and back up again, I waited for the 15 minutes that seemed to pass with ease. Settling in once again, we were catapulted once more, this time getting the same great ride. However, I noticed this time around that we just recieved a double launch.

Definetly a great experience. With no time left, I sulkingly head back down to the lobby, and found out I could ride again.

I finally settled in for the fifth time, destined to be my last with my friends waiting for me...Slowly waiting, the LIM launch wait was screeching, my skin was crawling...Then...boom...

Finally, after scratching to a stop back into the huge tunnel, I bid the coaster a farewell in soul. While Sahara was historical, and no doubt will be missed in its attempt to wait out the economic crisis (Yes...Sahara isn't being torn down, rather it's closing indefinetly so they can watch for an opening for when they can reopen), we can all stand by and salute the proud coaster that will forever stand tall above the Sahara, a coaster that was built to save Sahara, and will most likely soon fall with the Sahara. 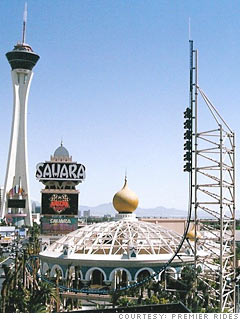 (Afternote: That bad feeling I had ended up causing me to barf as soon as I entered my hotel. Thankfully, I made it into the garbage can...

^ Glad you got to ride it again! It was one of my favorite things to do when in Vegas...

I have a gut feeling the Sahara won't reopen... they've let it decline so much over the years that it seems like there's no interest in bothering, but you never know. Last time I was there ('09), it was noticeably dirty and more rundown than I had remembered, so I can't imagine how it must look now. I would love to see the ride saved, but that probably won't happen either. I kind of hope that if they decide to open again at some point that it would remain the Sahara, but it would probably be re-branded into a nightclub-like douche fest like some of the other hotels have become. Oh well. Who knows, maybe Vegas will get some worthwhile rides if they ever end up building the proposed park.
Reply with quote
Sir Coaster

If Sahara DOES go under...Speed won't be going anywhere. A worker inside the hotel told me that the hotel has obsolutely NO intentions to sell Speed: The Ride. If Sahara doesn't get an economic push (HIGHLY LIKELY), then Sahara and Speed both go down...Sad, but true.

^
And we all know how reliable "a workers" information is.

I just found this at NewsPlusNotes:

As we all heard earlier this year, the historic Sahara Hotel and Casino will be shutting its doors on May 16, 2011. The biggest disappointment to the coaster community is the loss of Speed: The Ride, arguably the best thrill ride in Vegas. Rumors have swirled from the ride being melted down to being up for sale.

The biggest rumor around the strip now, and coming to me from a very trust worthy source, is that the ride has been sold to none other than -drum roll please -Six Flags. This isn’t a huge shock if you think about it. Six Flags hasn’t been quiet about its recent financial struggles, and the opportunity to purchase a ride like Speed for significantly less than it would be new is perfect for the theme park operator.

Now I’m still classifying this as a rumor, but it’s exciting to hear the buzz leaning toward the ride being reused elsewhere rather than serving its final ride on May 16, never to thrill again. An argument can be made for almost all of Six Flags’ parks and who deserves the ride more - but I won’t speculate just yet on who will get it, as it is far too early to say.

The price tag of the coaster seems to be on par with other rumors I’ve heard at $5 million. That is not a bad re-sale price at all and SBE, the parent company that owns the Sahara, must be fairly pleased with that kind of money coming in on the sale of an 11 year old coaster. The sale of the coaster also says a lot about the future of the Sahara itself.

SBE has been pretty mum on the future of the property, acting as though they have no plans for its future. The sale of Speed, well before it’s even closed, shows that they are actively looking to clear space at the Sahara. How much space you ask? Well, the word most of my insiders on the strip seem to be hearing is that Vegas may be seeing its first implosion since the Frontier when down in a cloud of dust on November 13, 2007. And SBE doesn’t intend to just have an empty lot; they are looking to build the next big Strip resort and bring some life down to the North end of Las Vegas Boulevard.

Until SBE decides to break its silence, however, we must continue to play the waiting game to find out what will happen with the property, as well as the fate of that towering 200 ft. Premiere coaster. It’s definitely not bad news to here that the current construction pause on the Strip may be at an end sooner than we all expected. I’m sure everyone will join me in crossing their fingers in hoping that the recession’s presence in Vegas and at similar attractions is soon at an end.

Screamscape is reporting that Speed will close May 1st and not when the hotel actually closes... hopefully no one was planning any last minute trips after the 1st...

I mean, it could be wrong, or mis-communication within the employees (evidently the front desk was the source of the May 1st date), but I don't see why they'd keep it open anyway... it can't be bringing in that much extra money.
Reply with quote
snowboard83

^Actually...I was. As well as a few friends of mine coming along.. May 4th. First time I was ever going to ride it. Flying from VA to attempt it too. The way they run the ride every 15 minutes and the way they charge a small fortune to ride it, I would be surprised if it didn't bring in a fair amount of money. Probably more money than their $1 Blackjack!
Post a reply
>>
<<
Switch to full style