How about some Downtown Aquarium Denver?

Hello! Like a lot of folks, Erik & Smisty haven't traveled a lot since 2019. So, a few months back, on the theory that as vaccines rolled out, built-up desire for leisure travel would result

We're not water park people. I mean, we've been to a small handful, but it really needs to be something special to get us to deal with all the inherent inconvenience of the general water park experien 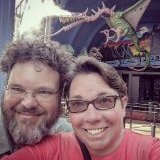 Erik!! You forgot the best part: the water park didn't sell or rent towels. It was just, "Good luck, travelers." I also bought the best generic shirt here. It just says Water World at the bottom.