Ryan (that's me) and Laura go to Japan 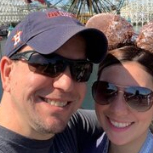