Why is there a nationwide lack of flat rides in the US? 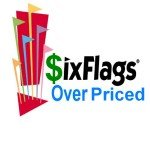