Now, Bill. . you have to search for the clinical term:  "Blueprints shaped like penis" 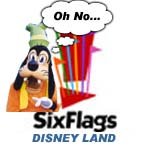 Here are some pics of the Texas Thrillseekers Behind The Scenes tour of Poltergeist!