what coaster did you severely underestimate 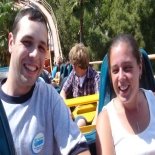